It's 2014 and our students are learning valuable secrets of Okinawan martial arts. Next time you watch a martial arts demonstration and you see students breaking boards or rebreakable plastic boards - think of the Arizona School of Traditional Karate and all members of Seiyo No Shorin-Ryu Karate Kobudo Kai. Our students learn a little geology along with karate. We keep it simple and cheap and head to the hills for rocks to break. Rocks cost nothing and provide a good opportunity on teaching the principals of breaking and a little about geology (but don't try this at home).
Each year, members of Seiyo No Shorin-Ryu karate kobudo kai break rocks for an evening of entertainment.

In additon to breaking, there are many other martial arts taught at the Arizona School of Traditional Karate that you will not see in most martial arts schools. One is shitai kori - body hardening. This is a difficult martial art to learn, but takes only time and effort and proper instruction. We don't recommend it for everyone - only those who are interested in testing themselves.

Posted by Soke Hausel at 1:09 PM No comments:

﻿﻿
Few martial arts schools, groups, associations and instructors in the world work harder at being the best than Seiyo No Shorin-Ryu Karate Kobudo Kai(TM) and Soke Hausel.

After teaching at the University of Wyoming for more than 30 years, Soke Hausel moved to the Phoenix Valley to open a dojo and hombu complex on the border of Gilbert and Mesa. Being acclimated to the university system over the years, his objective was to search out a university or college environment in the valley to teach martial arts, but bureauacracies forced the grandmaster to search for a private school.

Prior to moving to the Phoenix valley in 2006, Soke Hausel had been recognized as one of the top martial arts instructors in the world and had been inducted into 16 different Halls of Fame for his teaching methods.

In addition, he was elected to the board of the World Sokeship (Grandmaster) Council and the United States Soke Council.

Unlike many self-proclaimed and so-called grandmasters in the West, Soke Hausel worked his ways through the ranks over many years and was certified as the grandmaster of Seiyo No Shorin-Ryu Karate Kobudo Kai(TM) in 1999 by the Zen Kokusai Soke Budo Bugei Renmei.

Soke Hausel has also been elected to many dozen Who's Who compendiums over the years. 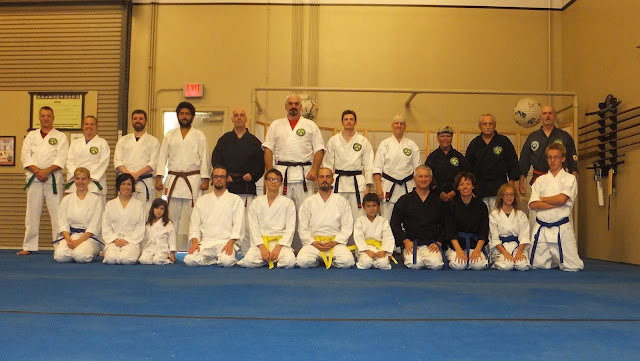 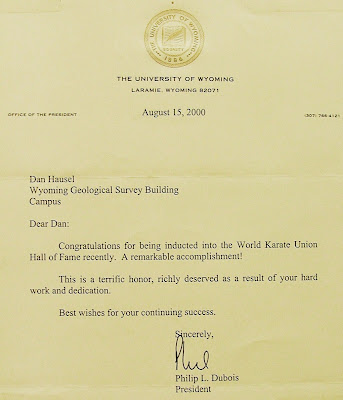 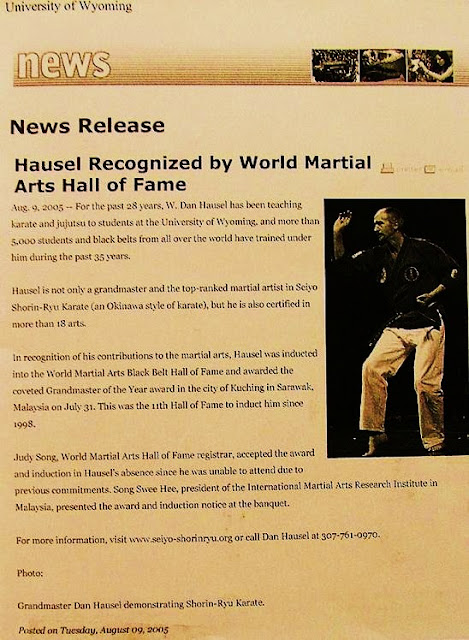 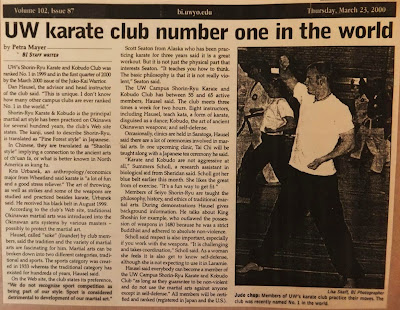 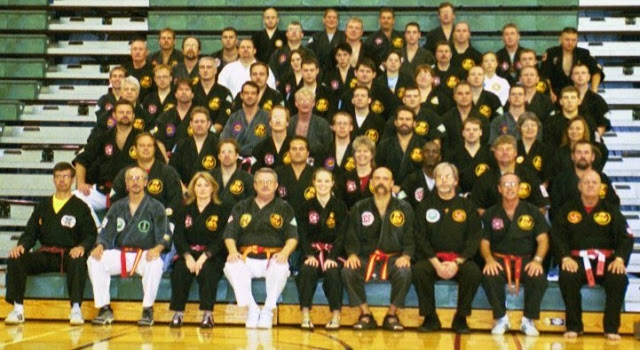 Like Us on Facebook to learn more about classes, styles and people in Shorin-Ryu Karate & Kobudo in Arizona as well as in the world.

You can learn more about the Arizona Hombu and our International Training Center in Mesa, Gilbert, Chandler, Arizona


Check out a few of our award winning sites at: 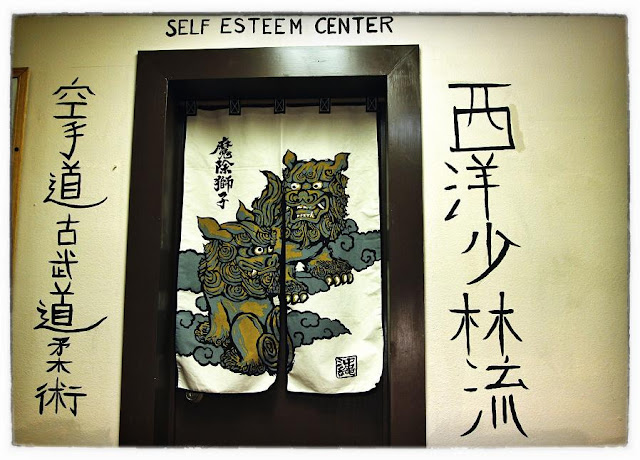 ﻿﻿﻿
Senior members of Utah Shorin-Kai from Murray traveled to Phoenix to train at the Seiyo Shorin-Ryu World Headquarters in Mesa.

The group studied advanced techniques in an ancient form (kata) known as "gojushiho" of Seiyo No Shorin-Ryu which translates as “54 steps”. The form contains secret strikes and throws of various master instructors from Okinawa a few centuries ago. 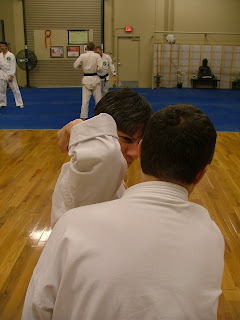 The kata was taught at the Arizona School of Traditional Karate in Mesa adjacent to the towns of Gilbert and Chandler. To the uninitiated, kata may look like some form of alien dance. But the dance can provide confidence building as well as many effective self-defense applications. Katas were developed by many great masters of Okinawan karate in the past to incorporate their favorite techniques from combat and to hide these from those outside of their ryu (karate family).

World Black Belt Martial Arts Hall of Fame inductee of Shorin-Ryu karate and kobudo, Soke Hausel, judan (10th dan red belt), taught the group the complex form and its interpretations while watching as they practiced various parts of the kata for self-defense (bunkai) at the Arizona School of Traditional Karate in Mesa.

The World Headquarters for Seiyo Shorin-Ryu Karate in Mesa, also known as the Arizona School of Traditional Karate is open to the public. Classes in self-defense, Okinawan Karate, kobudo (weapons) are taught to adults and family. The school and headquarters offers the top-rated karate classes in Phoenix.

When I recently traveled to Gillette Wyoming, Seiyo Shorin-Ryu students trained in body hardening and focus. Prior to traveling to Gillette, my students in Arizona had a chance to break rocks with their hands. Such training is only taught to Shorin-Ryu students who demonstate a knowledge of respect for one another because of the extreme training. Such training has been part of the Shorin-Ryu system for centuries, but have been forgotten by many schools in recent years.


When I was at the University of Wyoming, the UW Campus Shorin-Ryu Karate and Kobudo club would periodically provide half-time entertainment at the University Mens and Womens basketball games. These became very popular with the crowds as we would demonstrate karate, kobudo, self-defense, brick breaking and body hardening.

﻿ When it comes to shitai kori (body hardening) there are few secrets and a lot of serious practice, infusion of self-confidence, and conquering fears. Few martial artists take this to the extreme because most cannot conquer their fear.  When it comes to breaking, the same is true. Most martial artists can break boards (particularly manufactured rebreakable boards) but few can break rocks - this is because we have the impression that rocks will break us. If you do not understand breaking, any attempt of rock breaking will likely end up in tragedy.

Martial artists talk about Tien Hsueh or Okurasu Goroshi (vital point or delay killing strikes). How much of this is realistic. Some possibly, but one problem we all have in martial arts is that few of us are murderers - thus the practice of okurasu goroshi is unlikely. You may attend a martial arts clinic where the instructor talks about this or that as a death strike - but how would he or she know?

In our style of Shorin-Ryu, I teach Hitotsuki Hitogeri (one punch, one kick) in reference to one punch or one kick knock outs. I want my students to learn extreme focus so that they can knock a person out with one strike. And most develop this kind of focus. So is there a secret to this? Yes there is! Practice, practice, practice and learn not to hold back on your strikes.  If you train for competition, you learn to hold back on all of your techniques - this is why sport martial artists cannot develop good focus - as their muscles learn to punch without much effort, which is how they will react in any self-defense situation.

I recently saw on the news about a MMA fighter who defended himself against a would be robber. The photo of the robber showed that he was hit numerous times based on the number of bruises - thus the MMA fighter apparently did not have proper focus. In our system, the attacker should have only had one or two large bruises.